A Swiss magazine focused on ergonomics, health consciousness and well-being

“Fitness is as important as a clear mind.”

Petra Sprecher, a native of Basel discusses the challenges of her job as a stunt woman working in LA. 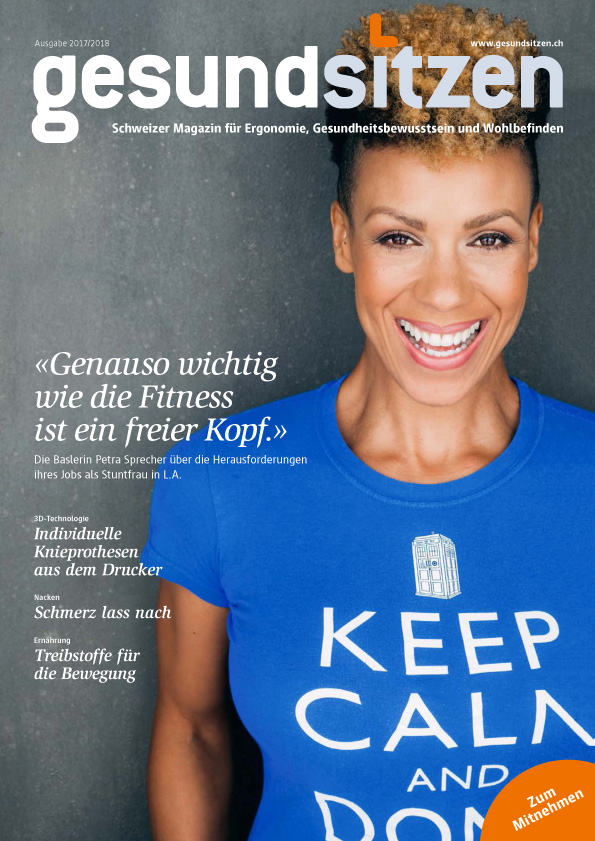 “If you don’t respect the job, you are risking too much.”

Basel native, Petra Sprecher is one of the most sought-after Stuntwoman in LA., but her career was nearly ended during her first major appearance. Therefore, she now pays more attention to maintaining a healthy body and mind, and focusing on the preparation of every stunt performance.

Gesundsitzen: Petra Sprecher, as a Stuntwoman you get hit by cars, fly from rooftops, crash through closed doors – how dangerous is your average day at work?

Petra Sprecher: Definitely more risky than a day at the office. Even though all preparations are taken to ensure nothing happens on set, and I am optimally prepared, there is no guarantee of safety or that the stunt is successful. That’s why stunt people, like myself are booked in the first place. Stars could do certain stunts on their own if there wasn’t a risk – but most of the time we are asked to do the insane!

Gesundsitzen: After 17 years on the job, do you still have any fear?

Petra Sprecher: Yes, and I know that this fear is necessary to stay focused. If you don’t respect the dangerous nature of the job, you become complacent, you are risking your life. Even if you have done it successfully ten times before, something can go wrong the eleventh time. You can’t afford to not be focused and to think that you have everything under control; you have to be fully present, take after take.

Gesundsitzen: Do you have a lucky charm or a ritual for challenging stunts?

Petra Sprecher: There is something that I do daily, even if I don’t have a shoot. It probably has something to do with my catholic background: I protect myself with holy water from the Cathedral of Our Lady of the Angels. The other thing I do is a little more of a mundane ritual, I always stretch my Achilles tendons very carefully because of past surgeries. The most effective protection against accidents is physical and mental fitness.

Gesundsitzen: In order to be optimally prepared, what does your training routine look like?


Petra Sprecher: Whether I have a shoot or not, I work out in my fitness studio every day and jog in the Hollywood Hills. Additionally, I receive special training in fight choreography, boxing, bladed weapons and modern guns. I do Yoga and Meditation daily to maintain a clear mind, which is just as important as fitness. Sometimes I get out of L.A. and into Nature, it brings Peace and helps to keep a sane mind. Overall I train about two to three times a day, except Sundays, that’s my day off.

Gesundsitzen: What do you do on set right before a stunt?

Petra Sprecher: My focus is primarily to get myself into the right state of mind. I focus entirely on the visualization of the stunt and the execution thereof.

Gesundsitzen: When you get booked for a stunt do you know what the stunt is going to be and do you have enough time to prepare?

Petra Sprecher: No, usually not, at least not exactly. At this point, even the director doesn’t know in detail how the scene will unfold. The final decisions are often made on set. Stunt people are usually always booked for the same category of stunts, though, so at least I’ll know if I’m either going to fall from a cliff, do a fight scene, or fly through the air on a wire.

Gesundsitzen: So far, what was the most dangerous or most spectacular stunt?

Petra Sprecher: A car hit. These stunts are generally categorized as high risk stunts because I work with a piece of “dangerous equipment”, a car in this case, which I have no control over. The slightest error will have dire consequences. Stunts with vehicles need the utmost concentration. I know some colleagues who wouldn’t accept another car hit gig. In any case, no one should do too many of those hard car hits, this way you are not testing your luck. I am very proud of that stunt, we got it in the first take, the director and producer loved it and I walked away unharmed.

(Caption under and next to photos, page 12)
Petra Sprecher’s training program consists of many different skills. Equally important as strength: Mental fitness.

Gesundsitzen: Were you ever not so lucky?

Petra Sprecher: Yes, during my first job, while working on the movie “Minority Report”. Inside the tall spaceship, I was strapped to a seat which broke out of the mount, and I fell seven to eight Meters hitting the ground with my neck. The accident was 16 years ago, but until today I have problems with my shoulder, but that’s not worth mentioning, since I could have died.

Gesundsitzen: In the absence of accidents what body parts are especially stressed?

Petra Sprecher: Actually it is most likely the whole body that gets a “beating”. Let’s take a fight scene where we get thrown onto the ground or smashed hard into a wall. Although your back is protected with a back protector, the impact still affects the entire body. And that is true for most stunts; the entire body suffers. That’s why it is extremely important to keep it strong and healthy with regular deep tissue massages, visits to the chiropractor and with the help of my Chinese doctor. Diet also plays an important factor. It’s not an issue to find healthy food in L.A., you can get Vegetarian, Vegan, or even raw food on every street corner. Local farmers offer fresh vegetables and fruits at the farmers market. You shouldn’t only eat healthy but also eat proportionally. In the stunt world slim and well trained bodies are in demand, therefore my menu consists of lots of salads, vegetables, fish, protein shakes, and a lot of water.

Gesundsitzen: While other girls dreamt of becoming famous as a singer or doctor, you started your first career as a Circus artist at the age of seven. How did that happen?

Petra Sprecher: The Youth Circus Basilisk is “to blame”. After I watched one show I really wanted to join. I thought it was cool what the kids could do. Three times a week after school I went to Basel by myself, to train. Then during the long summer holidays, we put the blue Circus tent up for shows in my hometown first, and after that we performed in several other cities of Switzerland as well. I went on tour from a very young age, even if only once internationally, to Istanbul in Turkey. This was exciting!

Gesundsitzen: Later you completed a 2-Year Physical Theater course, and you were one of seven people selected worldwide to be accepted into the prestigious National Circus School of Montréal. After that you were on the road with Cirque du Soleil as a Cloudswing artist for three years and performed over 1000 shows. Was that a dream come true?

Petra Sprecher: Absolutely. It was phenomenal to be cast with my Cloudswing solo, the acrobatic Aerial Act on the flying rope, with Cirque du Soleil. Traveling was super cool. Already as a kid I wanted to visit every country in the world.

(Paragraph above the photo, page 13)
Petra Sprecher grew up in Aesch, BL, Switzerland and spends her afternoons as an Artist in the Youth Circus Basilisk. When it came to the career choice she opted for the Theater and an education in Physical Theater at the private Comart School in Zürich. Shortly after that, she was accepted into the internationally renowned L’Écôle Nationale de Cirque of Montréal and represented Canada at the International Acrobatic Festival of Wuqiao, in China, where she won the Bronze Lion. Petra was very quickly recruited for Cirque du Soleil’s show Quidam with her solo high-flying Cloudswing Act. After many years of touring she settled down in Los Angeles and entered the stunt business. Her debut in stunts was in Steven Spielberg’s Minority Report, starring Tom Cruise. This led to TV series, TV movies, music videos and Blockbusters such as Pirates of the Caribbeans, Aeon Flux, Flight and Independence Day: Resurgence. Petra Sprecher is also a very successful stunt double for African American stars such as Rihanna, Rosario Dawson, Leona Lewis, Queen Latifah, and a popular training partner – Charlize Theron prepared with her for the leading role as an agent in the science fiction movie Aeon Flux. After 17 years as one of the most sought-after stuntwomen in L.A. she prepares for the transition into Acting.

Gesundsitzen: Why the career change from a Circus performer to a Stuntwoman?

Petra Sprecher: After performing the same act twice every day for years I just didn’t feel challenged as an artist. When we came to L.A., I immediately liked the city. It had its own charisma, its own tempo and vibe. In addition I had previously read about African American stuntwomen in a magazine. One thing led to another and all of a sudden I knew what I wanted to do next. In 1999 I joined the Screen Actors Guild, and in 2001 I began to work as a stuntwoman.

Gesundsitzen: What is the core difference between the job of a Circus performer and a Stuntwoman?

Petra Sprecher: There are two main differences. For one, as a Circus performer, you’ll take years to perfect your Act and the creation period for any given live show you’ll be a part of is lengthy. When working on set, everything has to come together very quickly. Like yesterday! Snap! Especially for TV. Film is a bit more forgiving with some rehearsal time. The other huge difference is that as an artist you have to take centre stage, the stage is yours, you are the most important person and irreplaceable. As a stuntwoman you are there for the actress, you help her and the character she plays to achieve the perfect performance. At the same time you are an invisible person, the stage belongs to someone else.

Gesundsitzen: Isn’t that difficult at times, to risk so much and in the end everyone is only talking about the actress?

Petra Sprecher: It’s not necessarily that I miss the spotlight. What I miss most is the regular, daily work that I’m used to from the Circus world! …although back then I got bored with the routine, but now I exactly miss that structure in my professional life.

Gesundsitzen: As a Stuntwoman when do you start thinking about leaving the profession, and do you already have plans for the future?

Petra Sprecher: Similar to professional athletes, at some point the body will reach its limit. I have a couple older colleagues in their fifties and sixties who are still in the business, so it’s possible. I’ve been attending Film acting school for over a year now. You’re more creative as an actress, and able to give more input in portraying the characters you depict. Right now my biggest challenge is to quickly memorizing my lines, and that I have to more or less sit still for that.

(Caption under photo, page 14)
The start and high point of a Circus career: Petra Sprecher as a young artist in the Youth Circus Basilisk and her solo Act on the Cloudswing in the production of “Quidam” from Cirque du Soleil.

(Click images to enlarge and read the original German interview.) 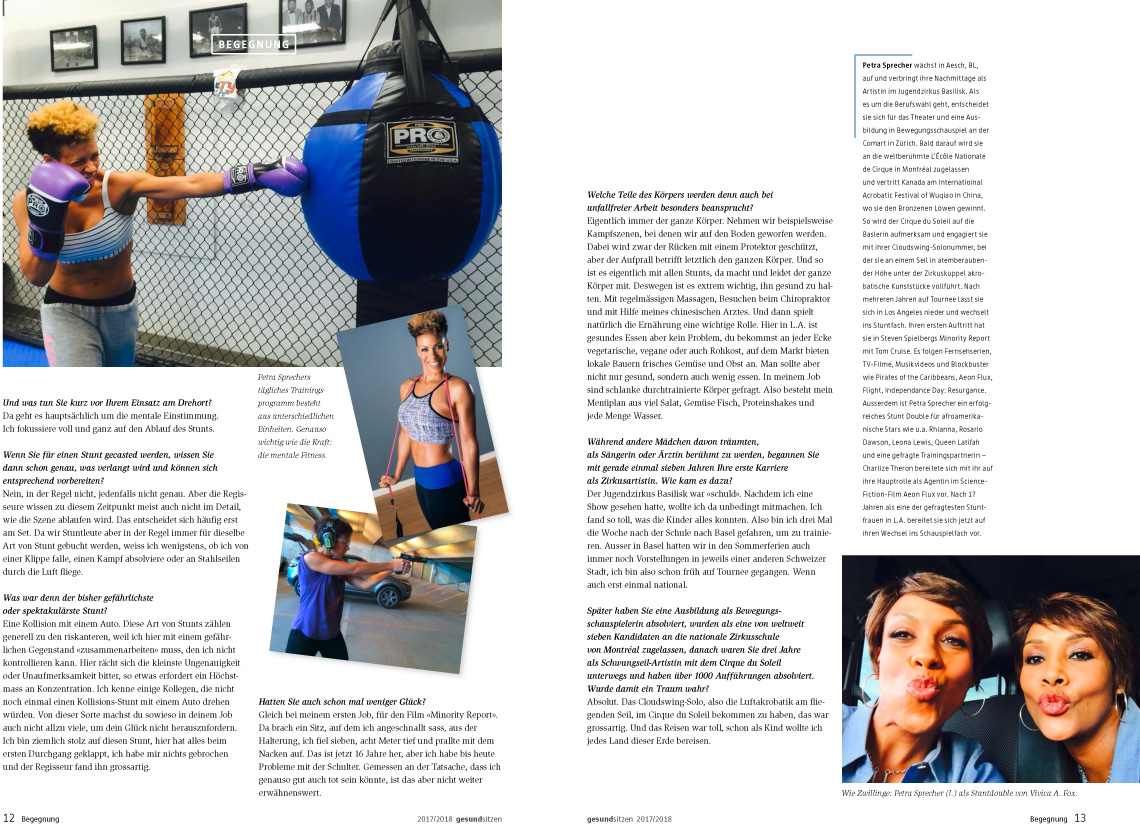