Petra On The Cover of Migros Magazine 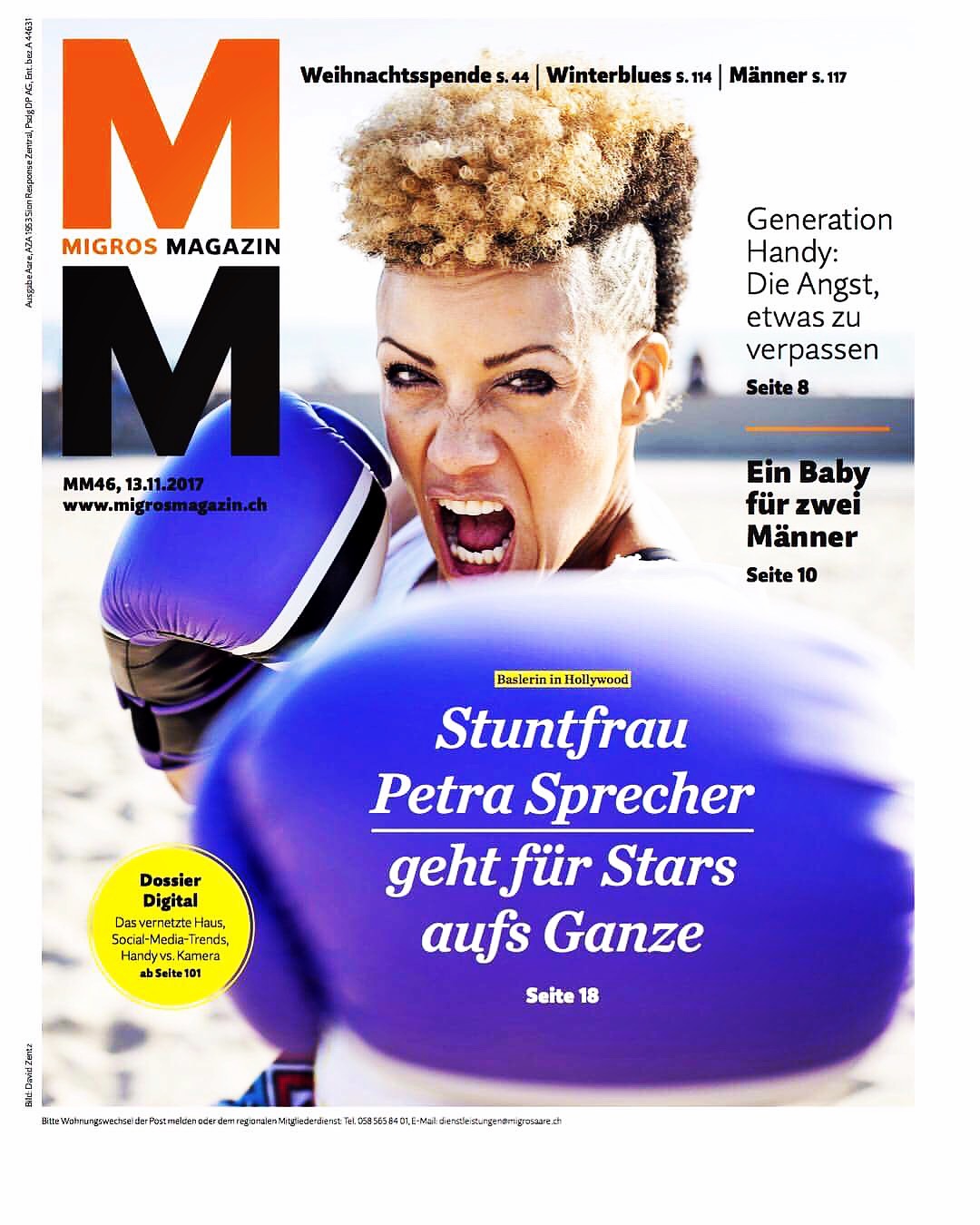 Petra Sprecher made the acrobatic leap into La La Land: With her extremely dangerous stunts, Basel native, Petra Sprecher is one of the most sought-after stuntwomen in the film industry.

She made it to the top as a stuntwoman: Petra Sprecher was in front of the camera with Stars such as Charlize Theron and Will Smith.

She falls from balconies, slams into walls, crashes through glass ceilings – or flies through space with Brad Pitt. The latter is at least a possible scenario: According to the online movie database “IMDb”, Petra Sprecher is listed as a stunt double for Pitts co-star Kimberly Elise in the fiction thriller “Ad Astra.”

The Basel native has been working as a stuntwoman in Hollywood for 16 years, but is only allowed to acknowledge her role when the movie goes to theaters. “It is common to sign a confidentiality agreement for major movies,” she explains while having lunch at a Santa Monica beach café.

In addition to secrecy, Petra Sprecher is asked to use her maximum strength for every stunt. “Pain and scratches are inevitable,” she says with a hearty laugh trying to minimize the real risks of her job. Concentration and alertness are her top priorities at work. And it’s not only the bones that are at risk. Petra Sprecher got a “souvenir” from the TV series “Charmed” in which she played a demon. “I had to wear customized yellow contact lenses for this stunt role,” she says. “At the last minute they were replaced by non-customized orange lenses. After an hour I couldn’t open my eyes anymore, and I finally had to go to the hospital. Since then I have a scratched cornea and I am allergic to sandy soil and air conditioning.”

However, all in all, Petra Sprecher has dodged severe injuries. But she also trains hard: Six days a week jogging, strength training, boxing and fight choreography are part of the standard program, as well as meditation and yoga. She also pays attention to her diet, says the athlete, who just ordered a salad and fish. “I allow myself a piece of cake from time to time, but I am very conscious about the food I eat. I am a stunt double for very slim actresses. They wear sizes that I didn’t even wear as a child!”

Petra Sprecher found her way to Hollywood via the Circus. As a seven year old she admired the Aerial acrobats of the Youth Circus Basilisk, and in no time she started training with them. While in college, she was finally fed-up sitting in a chair for hours. She decided to study at the professional Movement & Theatre School Comart, a private school located in Zürich, Switzerland: “At that time I wasn’t yet ready to play emotional roles. I just liked the acrobatics. And then something occurred to me: I had to go back to the Circus!”

Thanks to a recorded Trapeze act in a self-made pig costume, Petra was accepted into the renowned L’Écôle Nationale de Cirque in Montréal. She created a solo Cloudswing act and won a prize at an international Circus competition in China, and received the “dream job of every Circus performer”: a contract with Cirque du Soleil.

Petra Sprecher toured through the US for three years and performed in the show “Quidam”; but she never really thought about living in America prior to that until she stumbled upon an article about African American stuntwomen in Los Angeles.

Her start with Spielberg

However, there is no officially recognized professional training for stunt people: “You have to make your own contacts, and hope that someone will take you under his or her wing to get into the business and grow.” Thanks to her Trapeze artist experience, her very first stunt consisted of high-up wire-work and it was for none other than Steven Spielberg! “The stunt coordinator called and asked me for my height and weight and then one sunny day, I was asked to show up the following day at 7AM.” The name of the movie was not disclosed to her.

And precisely, the next Morning she stood promptly in front of the camera with Tom Cruise for the Action thriller “Minority Report”: “The less information you get during a phone call, the bigger the movie.” That’s what the sought-after stuntwoman has since learned. “Tom was great, he loves stunt folks. We stood on a small balcony between set-ups and talked about all sorts of things.”

Since then Petra has performed in Blockbusters such as “Pirates of the Caribbean” and “Independence Day: Resurgence,” filmed with Charlize Theron (“Aeon Flux”) and Will Smith (“Hancock”), and acted as a stunt double for Leona Lewis, Rosario Dawson, Rihanna, and Mariah Carey. However, the scene with Carey was cut out of the comedy “The House” – and so was Petra Sprecher. “You have to learn to live with that, but maybe in the end I’ll still make it onto the DVD and get royalties,” she says and laughs, holding her gym bag under her arm and getting ready for a workout on the beach.

Between Fame and Risk

Petra Sprecher grew up with her mother, a schoolteacher, her father, a computer scientist, and her two younger brothers in Aesch, BL, Switzerland. Her mother separated from her Nigerian father shortly after Petra’s birth.

She already participated in the Basilisk Youth Circus while in primary school. After attending the professional Movement & Theatre School Comart in Zürich she was accepted into the L’Écôle Nationale de Cirque of Montréal. Afterwards she toured through the US with the internationally renowned Canadian Cirque du Soleil.

In 2001, Petra transitioned into the world of stunts. Since then, she has worked on Blockbuster Hollywood productions such as “Minority Report”, “Pirates of the Caribbean”, and “Independence Day: Resurgence”. Petra doubles for Stars such as Vivica Fox, Leona Lewis and Mariah Carey. 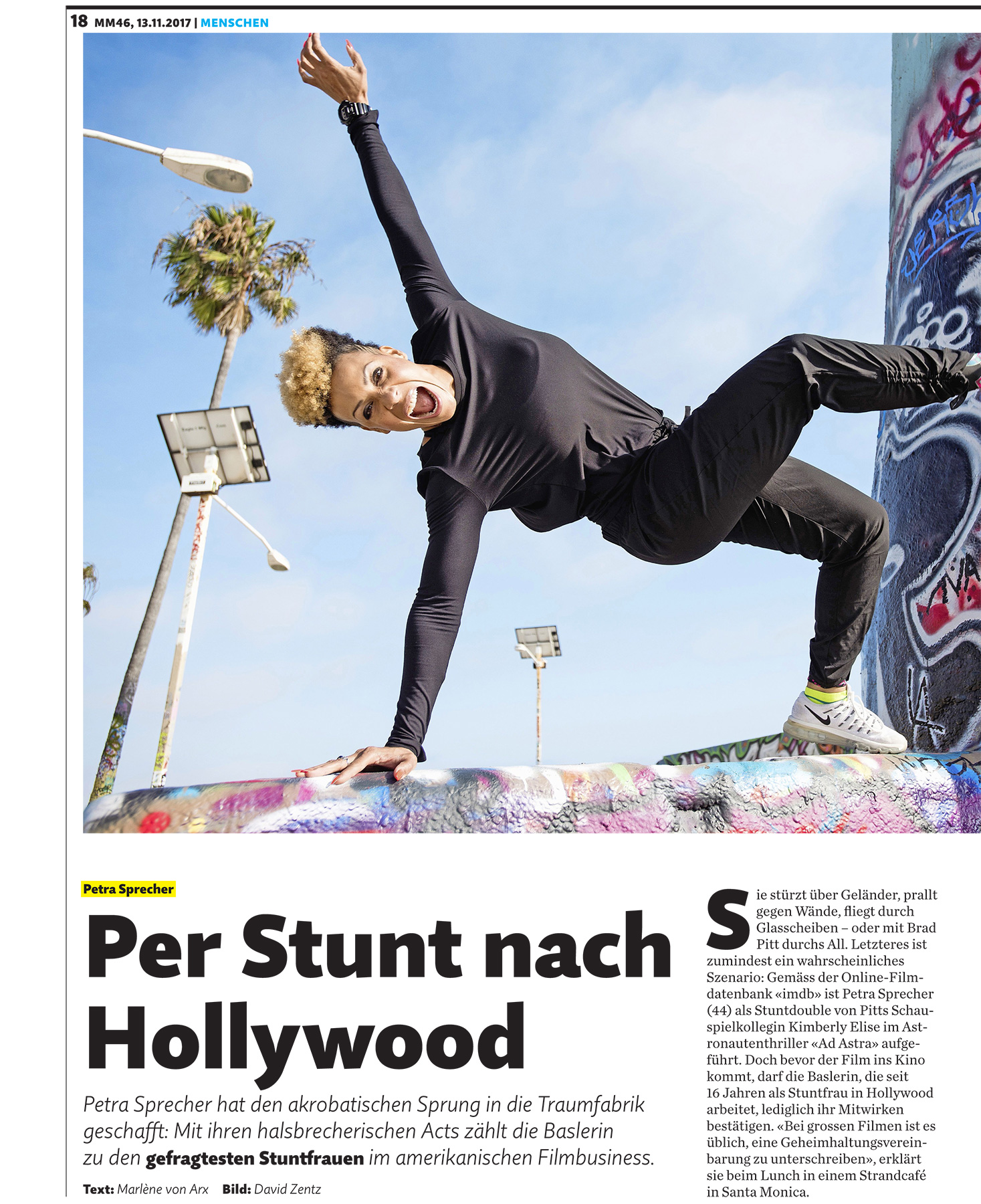 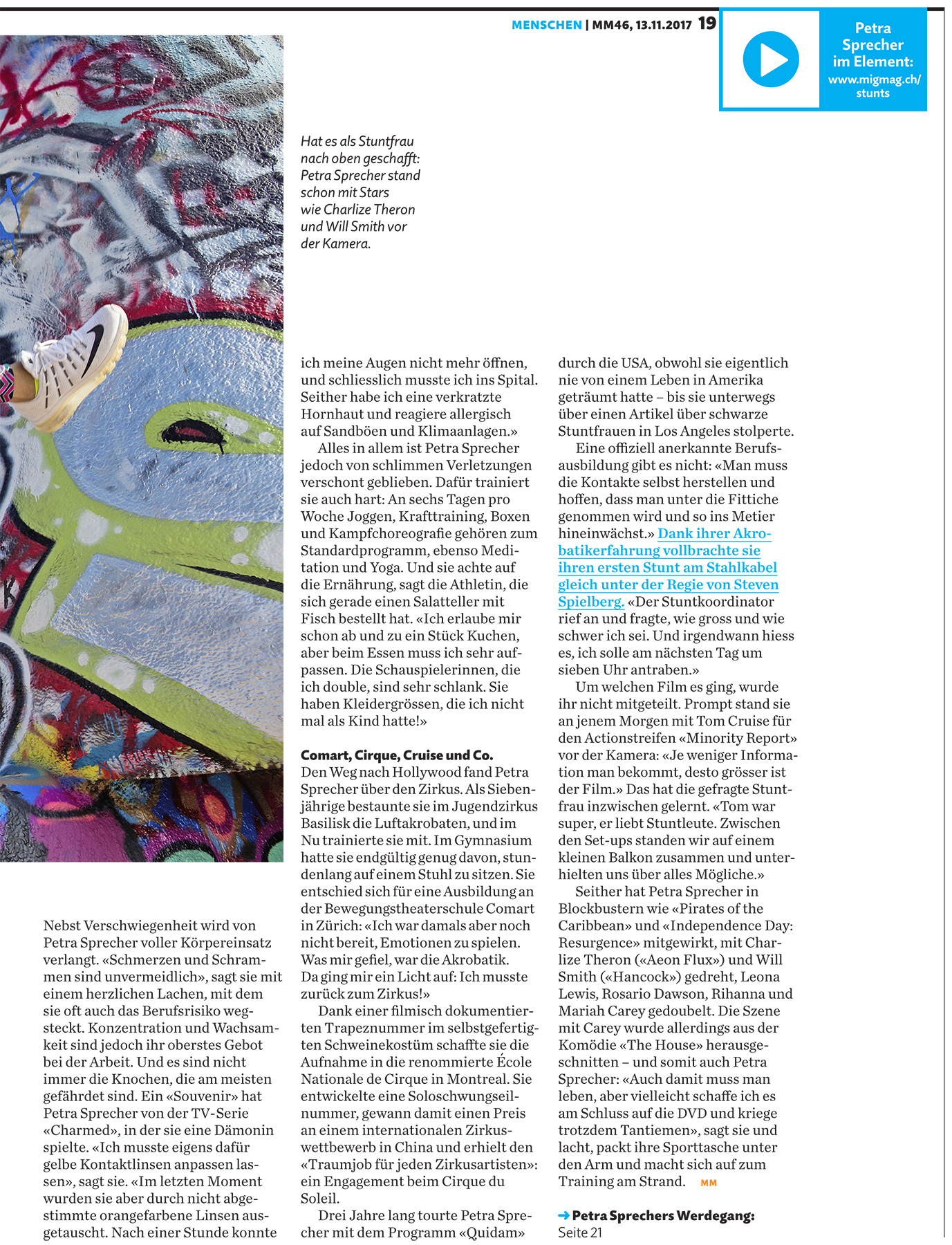 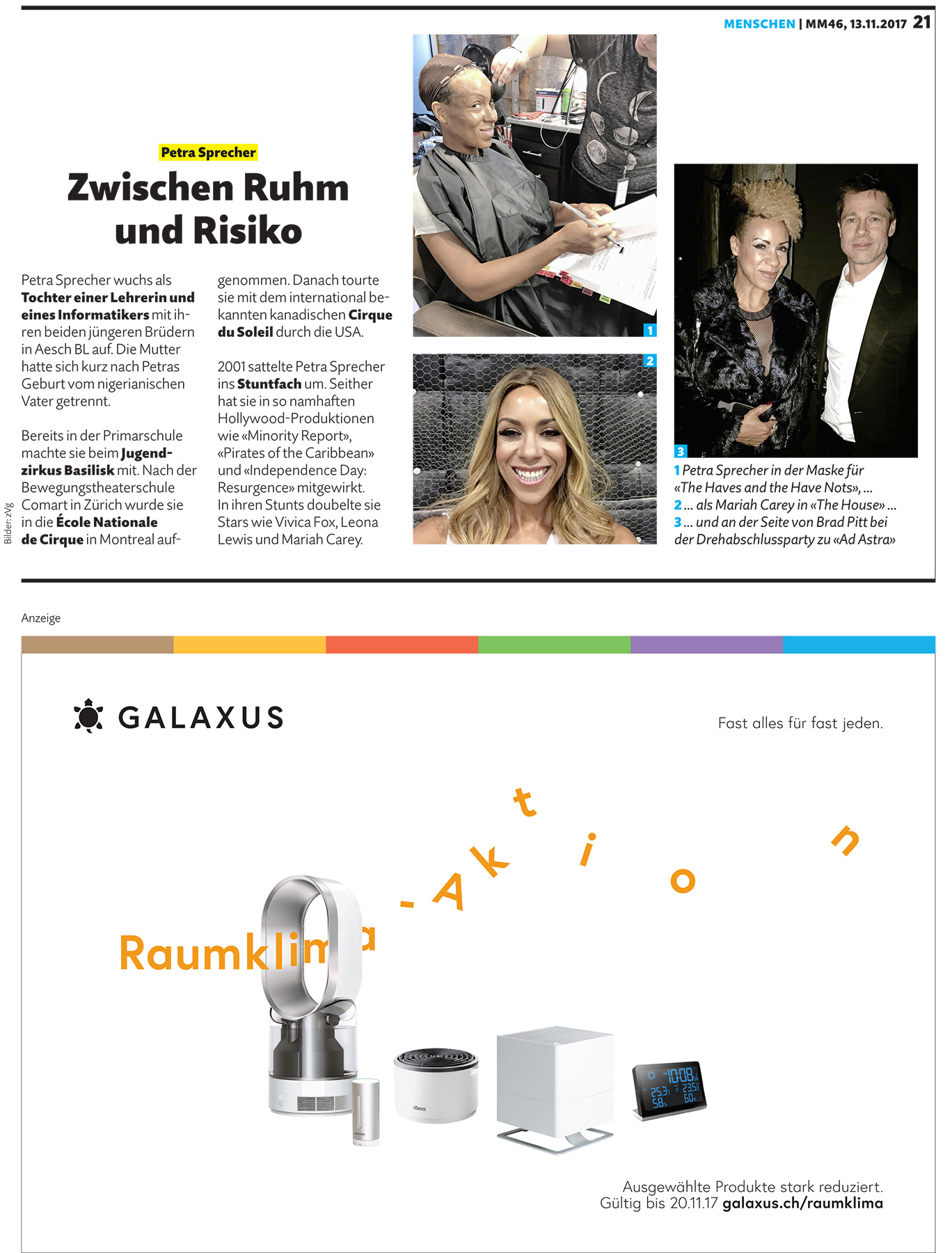