“I was first drawn to Yoga by the teachings of Vedanta, a philosophy taught by the Vedas – the most ancient scriptures of India.”

Petra Sprecher is a certified Yoga teacher. Thus far, she has taught over one thousand Yoga classes over a period of three years. She is registered with the Yoga Alliance at the E-RYT 200, RYT 500 level. Petra strongly believes that education is a life-long pursuit and has therefore completed a variety of teacher trainings over the past six years with these following words of wisdom in mind:

Her most recent studies (200-hours) with Master teacher Jeanne Heileman & Sarah Ezrin were methodized by YogaWorks and took place at Center for Yoga on Larchmont Blvd. Preceding trainings include concentrations on Ashtanga Yoga; Mysore style and Led (200-hours) with Caroline Klebl Ph.D at Source of Yoga in Beverly Hills, Ca and Yoga Nidra/Deep Sleep & Restoratives (9-hours) with Richard Miller Ph.D of the iRest program, at the Veteran’s complex in Culver City, Ca. Her very first Yoga teacher training (500-hours) in 2009 was directed by James Brown; assisted by Alexandria Crow, Sonya Cottle & Maria Villella, at the American Yoga School in Venice, Ca. Petra has 909 teacher training hours.

It was both the physicality of the practice and the astonishing teachings of Vedanta – an ancient Indian philosophy – that drew Petra to Yoga. She lives on the garden property of a Hindu temple nestled in the Hollywood Hills and considers herself privileged to be located in this natural, meditative wonderland. Just a few steps away, she takes advantage of daily classes & lectures on important subjects like The Four Yogas; Karma Yoga (The path of Action), Bhakti Yoga (The path of Devotion), Raja Yoga (The path of Meditation), Jnana Yoga (The path of Knowledge) or on Vedanta philosophy (Upanishads, Bhagavad Gita, Purānas), which are taught by the resident Indian Swami Sarvadevananda, visiting Swamis from all over the world, monks and nuns. Spiritual luxuries in the form of countless customary events such as Pujas, Kirtans, Ram Nam, Arathi, Vigil and Silent Retreats are further valuable features of so-called Temple–Life. 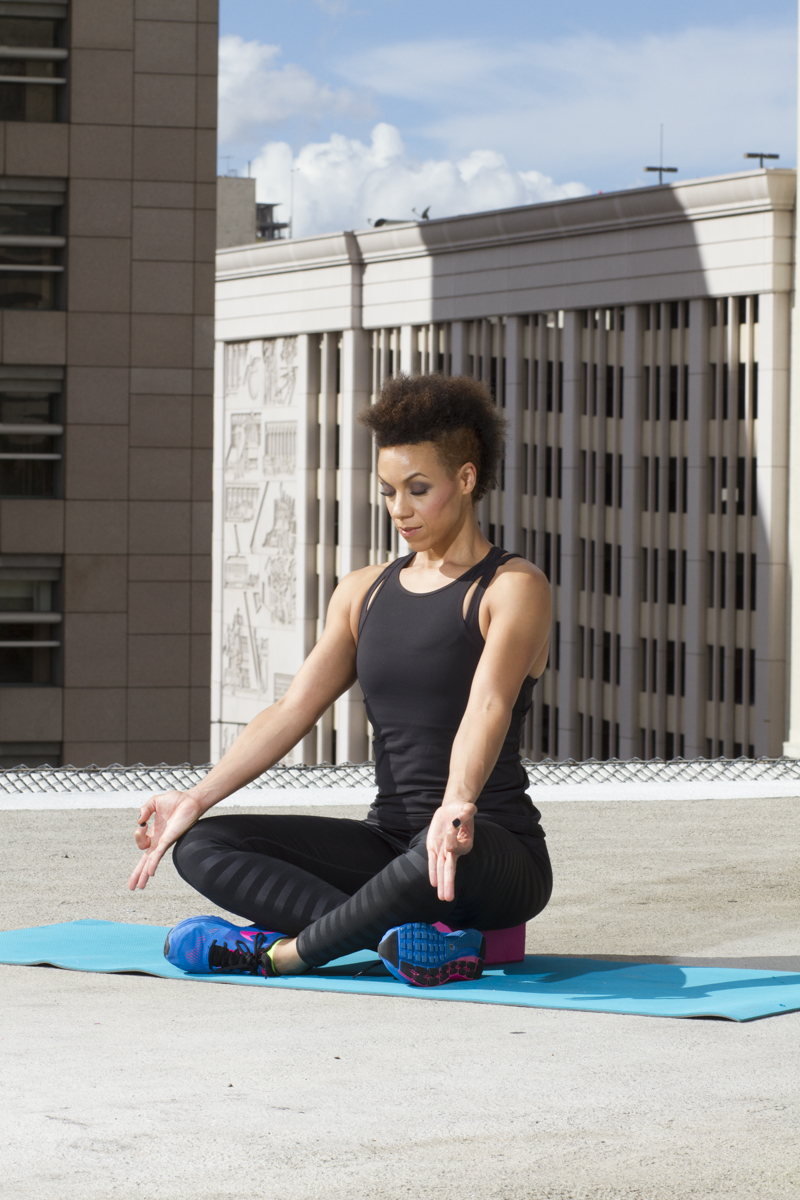 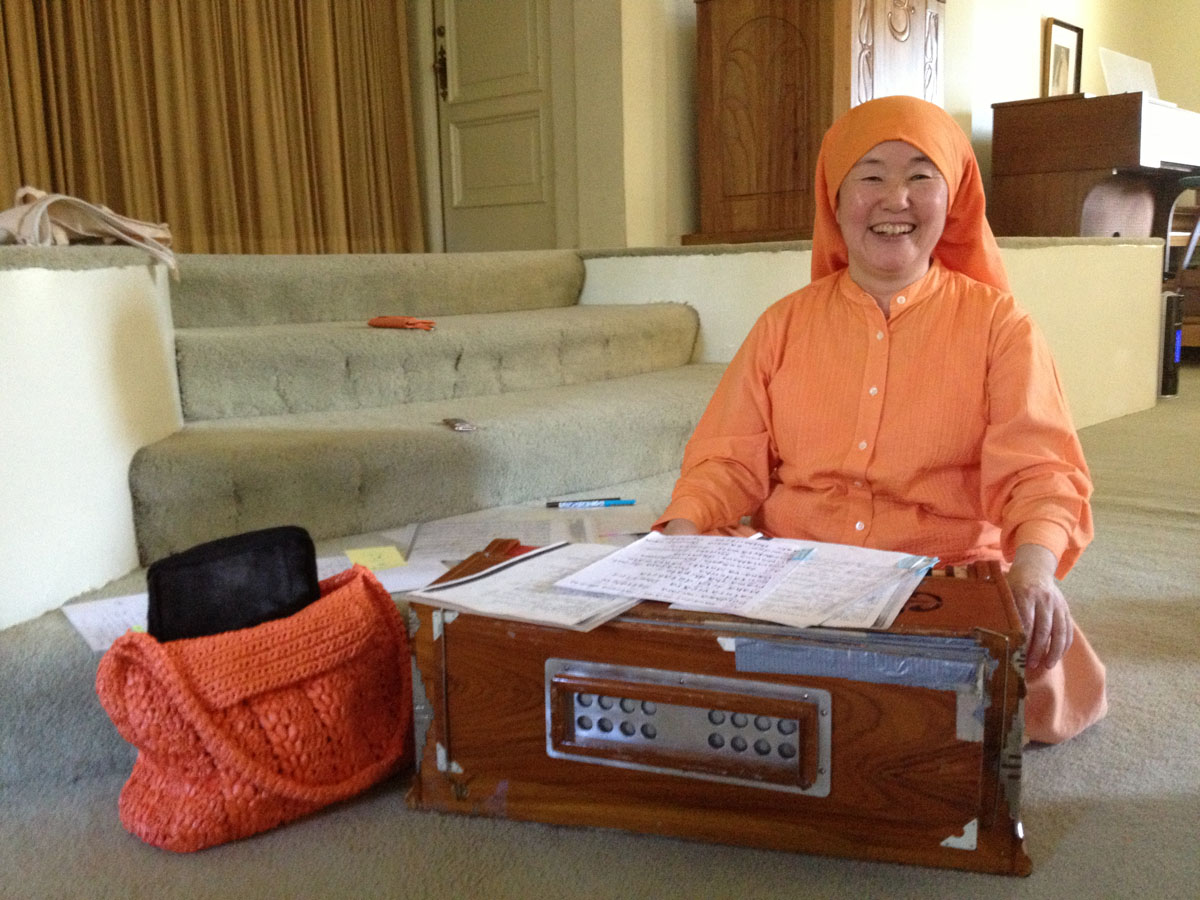 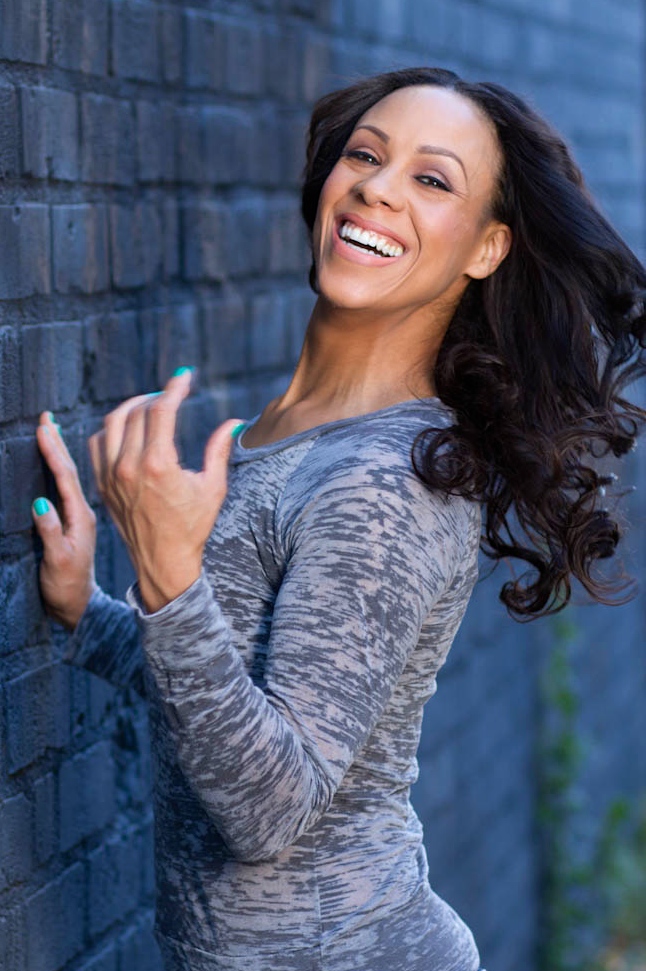 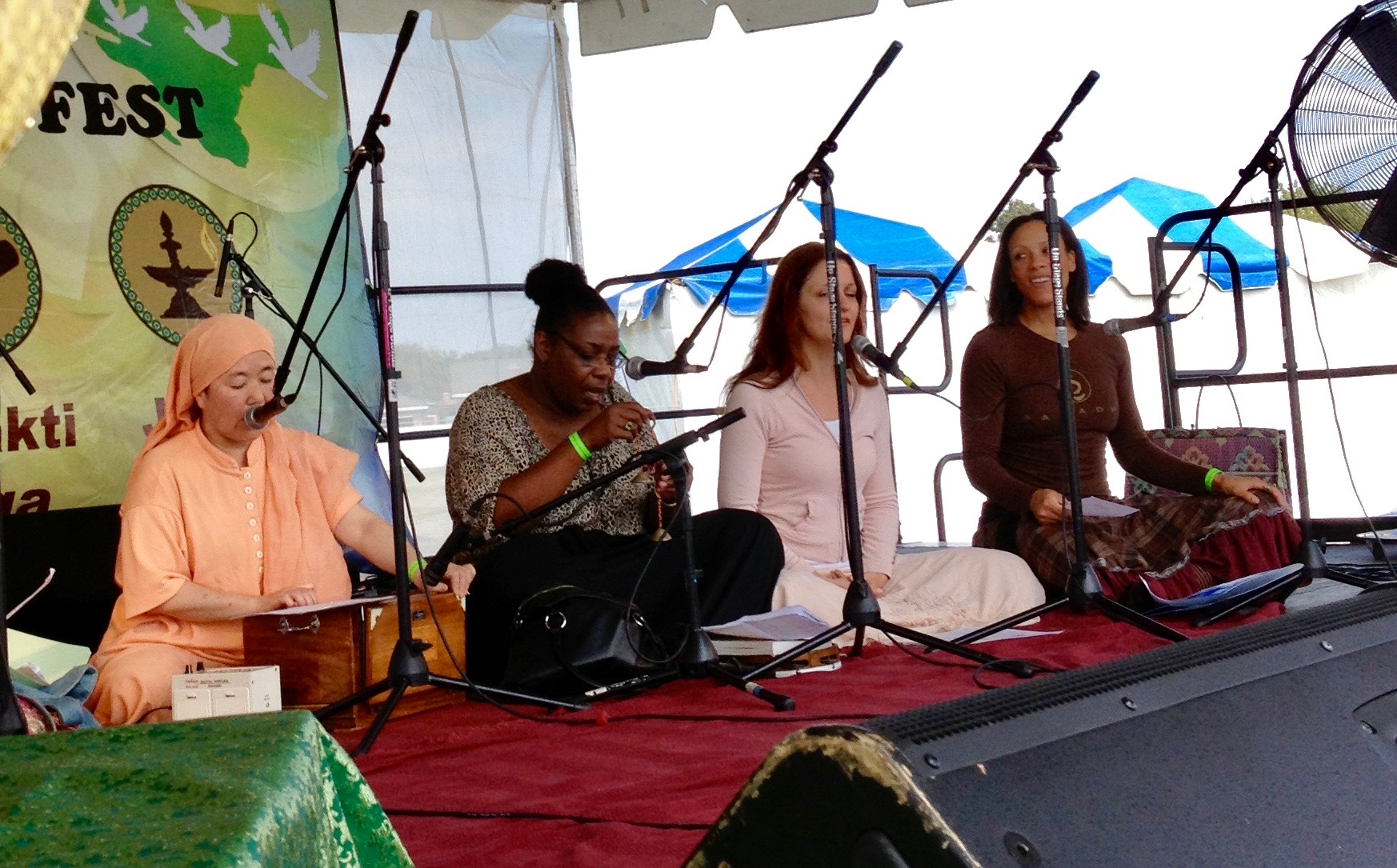 Petra has a traditionalist outlook in both her teaching and private practice that does not separate the physical, meditative and spiritual aspects, but strives to combine and reintegrate them for herself and her practitioners.

“All my classes include elements of Hatha Yoga, Ashtanga Yoga, and I always finish with a session of deep relaxation. I truly enjoy guiding students in this moment of peace, and going beyond what they thought was possible, whether it’s physical or mental.”

Another perk of living on temple grounds is the many classes in Vedic Chant, which are taught by the lovely Japanese head nun Pravrajika Dayaprana.

“Here is one of my favorite verses of the Śāntimantras, the peace chants, that I open many of my classes with”:

“And this is another powerful verse of the Śāntimantras, that I sometimes use to close my classes with”: 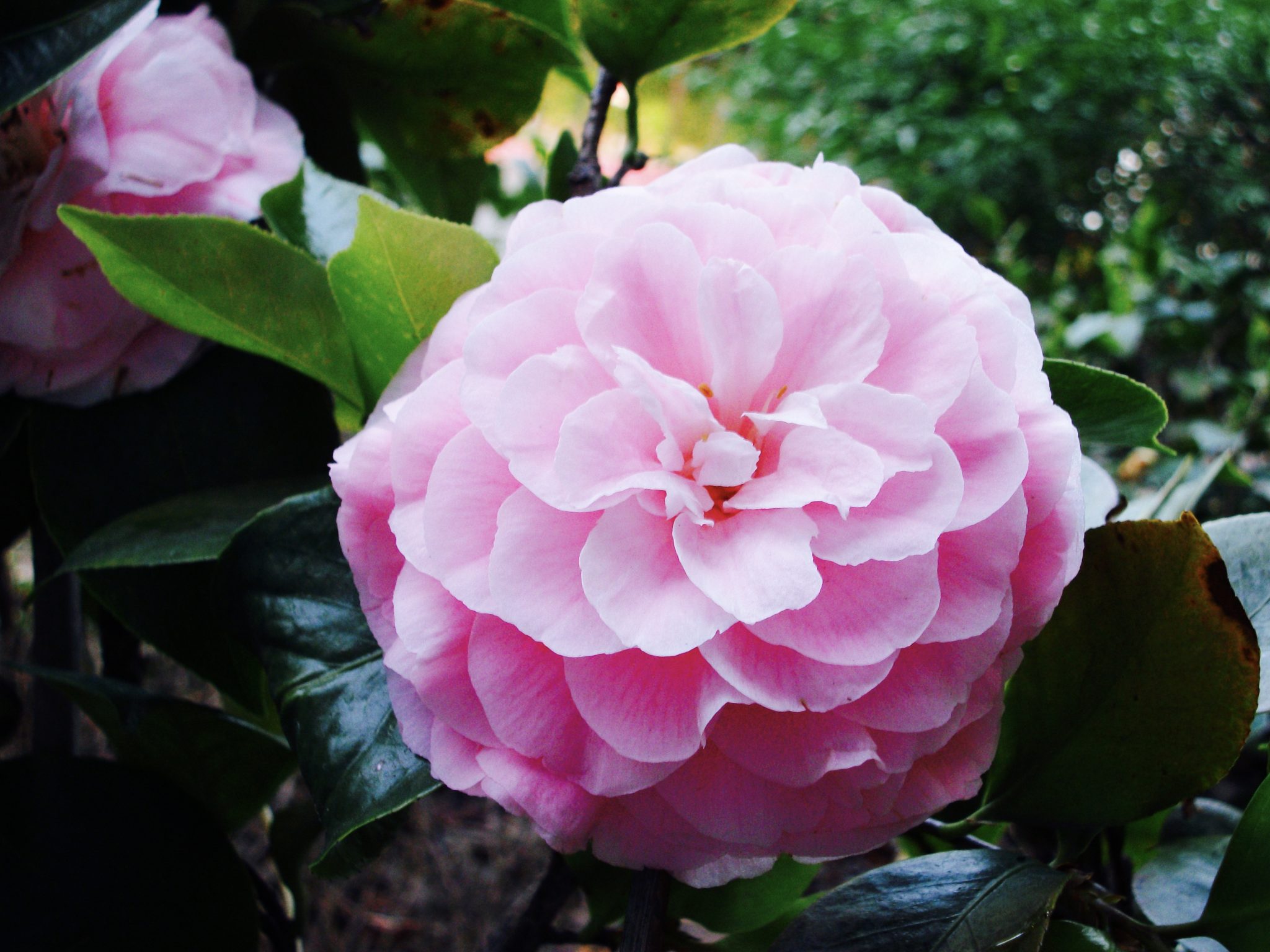 Chanting is easy! You don’t have to sing well because it’s not about singing, in the usual sense. We’re not memorizing complex lyrics, layering harmonies, and we’re certainly not busting out powerhouse solos! All that is required is the following: Do it from the heart and with the belly.

By combining sound, breath and rhythm, this sort of Mantra Meditation channels the flow of energy through the mind-body circuit, adjusting the chemical composition of our internal states and regulating brain-hemisphere imbalances. By balancing the nervous system, our moods begin to soar and we experience an overall sense of well-being. Chanting is a pleasure that transcends the senses, it takes us beyond the bounds of time and space.

Here, the professional musicians of the phenomenal The Art Of Living Kirtan are accompanying us… Such a joy and huge treat! 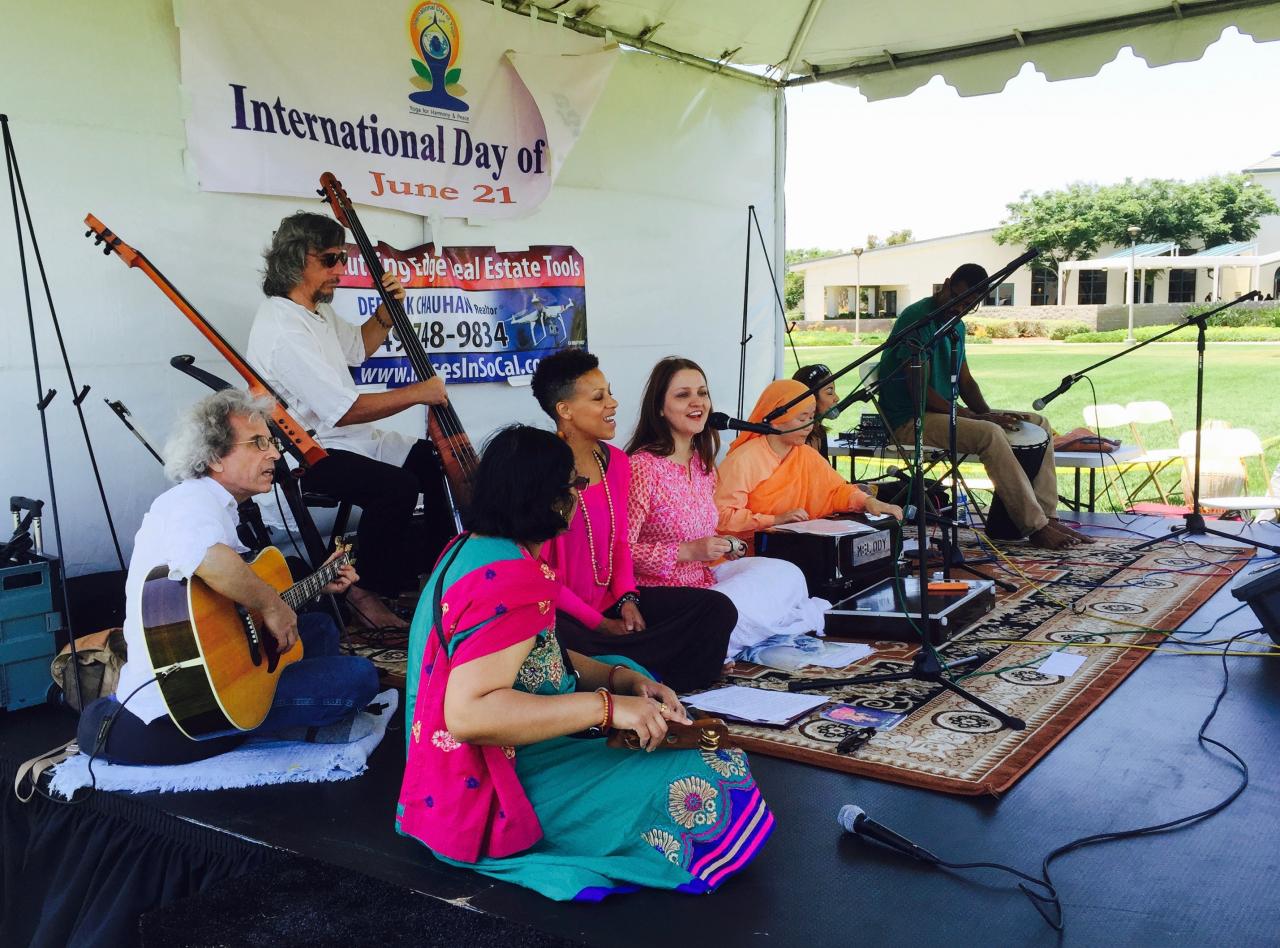 BALAJI aka SRI VENKATESWARA (In Calabasas) 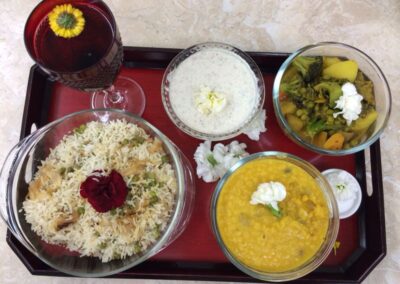 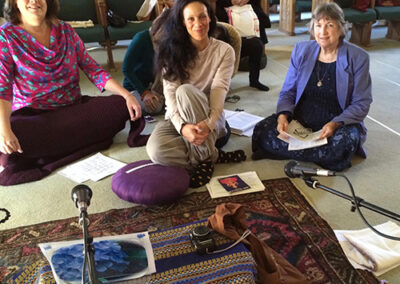 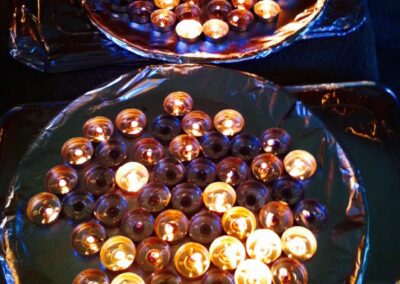 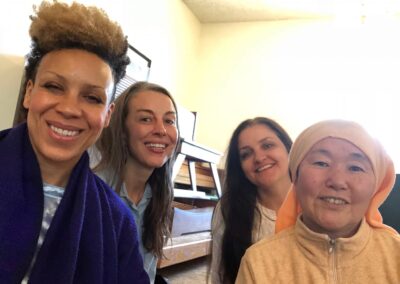 The Core-Four of our group Vedanta Bhakti 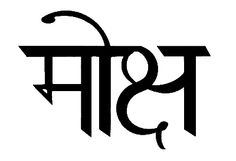 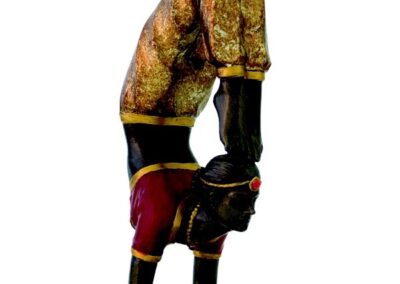 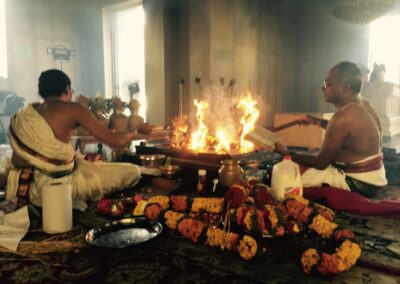 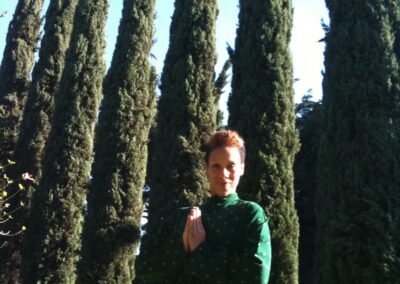 Temple entrance – about to go meditate… 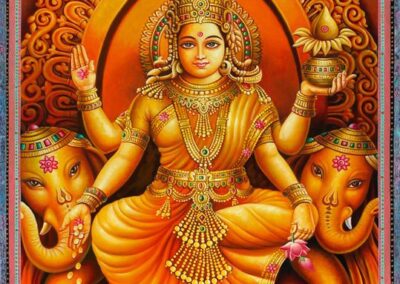 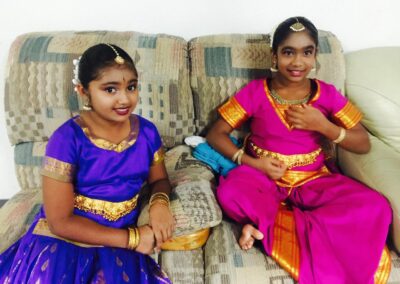 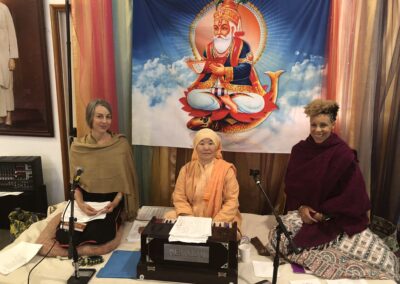 Devotional singing-gig for the seniors at the Sindhu Center 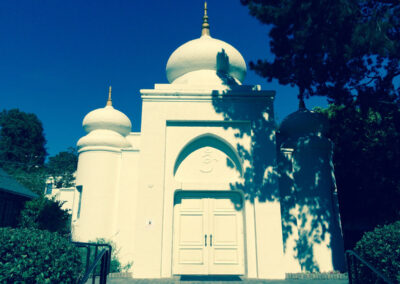 The VEDANTA TEMPLE in Hollywood! …the architect actually got his plans mixed up! …this temple wasn’t built according to typical Hindu architecture! 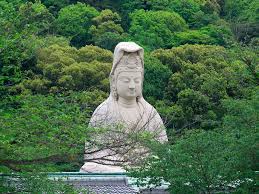